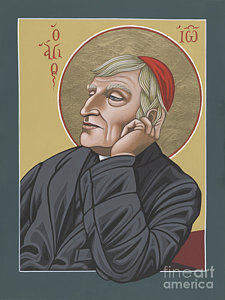 The Heart of Newman: A Synthesis, arranged by Erich Przywara, S. J.

The Story of A Soul, by St. Thérèse of Lisieux

Walking the Little Way of Thérèse of Lisieux: Discovering the Path of Love, by Joseph F. Schmidt, FSC.

The Hidden Face: A Study of St. Therese of Lisieux, by Ida Friederike Gorres. Ignatius Press 1959, 2003

Shirt of Flame: A Year With St. Therese of Lisieux, by Heather King. Paraclete Press, 2011

Two Sisters in the Spirit: Therese of Lisieux and Elizabeth of the Trinity, by Hans Urs von Balthasar. Ignatius Press, 1992 (originally published 1970)

The Collected Works of St. Teresa of Avila, Volumes 1 - 3, Translated by Kieran Kavanaugh

A Man of the Beatitudes: Pier Giorgio Frassati, by Luciana Frassati

My Brother Pier Giorgio: His Last Days, by Luciana Frassati

The Life of St. Catherine of Siena, by Blessed Raymond of Capua

Catherine of Siena: A Passionate Life, by Don Brophy

Clare of Assisi: A Heart Full of Love, by Ilia Delio, O.S.F.

The Humility of God, by Ilia Delio, O.S.F.

Sun and Moon Over Assisi: A Personal Encounter with Francis and Clare, by Gerard Thomas Straub

The Letters of Padre Pio: Vol. 1-3
- Volume III, Correspondence with his Spiritual Daughters (1915-1923)
- Secrets of a Soul: Padre Pio's Letters to His Spiritual Directors

Words of Light: Inspiration from the Letters of Padre Pio, complied and with an introduction by Fr. Raniero Cantalamessa

39 New Saints You Should Know, by Brian O'Neel (forward by Joseph Pearce)

The Retrial of Joan of Arc: The Evidence for Her Vindication, by Régine Pernoud

Joan: The Mysterious Life of the Heretic Who Became a Saint, by Donald Spoto

A Holy Life: The Writings of St. Bernadette of Lourdes

A Woman Clothed With The Sun: Eight Great Apparitions of Our Lady, edited by John J. Delaney.

Fatima for Today: The Urgent Marian Message of Hope, by Andrew Apostoli.

A Pilgrim's Journey: The Autobiography of Ignatius of Loyola, Introduction, Translation, and Commentary, by Joseph N. Tylenda, S.J.

Journal of A Soul: The Autobiography of Pope John XXIII

God is All Joy: The Life of St. Teresa of the Andes, by Jennifer Moorcroft

The Secret Diary of Elisabeth Leseur: The Woman Whose Goodness Changed Her Husband from Atheist to Priest

My Life with the Saints, by James Martin, S.J.

Making Saints: How the Catholic Church Determines Who Becomes a Saint, Who Doesn't and Why, by Kenneth L.          Woodward

Book of All Saints, by Adrienne von Speyr

Gathering A People, by Judith Tydings

They Called Her the Baroness: The Life of Catherine De Hueck Doherty by Lorene Hanley Duquin

The Beauty of Holiness, by Michele L. Catanese

Fire and Light: Saints and Theology, by William M. Thompson

A Brief History of Saints, by Lawrence S. Cunningham

101 Questions and Answers on Saints, by George P. Evans

Conversations of the Saints: Words of Wisdom From God's Chosen, by Bernard-Marie, O.F.S. and Jean Huscenot, F.E.C.

Books on Mysticism and Mystics:

Mysticism, by Evelyn Underhill (This is a classic.)

The Essential Writings of Christian Mysticism, edited and with an Introduction by Bernard McGinn

Light from Light Light: An Anthology of Christian Mysticism, edited by Louis Dupre and James A. Wiseman, O.S.B.

The Mysticism of Everyday, by Edward Carter, S.J.

What Are They Saying About Mysticism? by Harvey D. Egan, S.J.

Christian Mystics: The Spiritual Heart of the Christian Tradition, by Ursula King

When the Lion Roars: A Primer for the Unsuspecting Mystic, by Stephen J Rossetti

* Cross reference: The Collected Poems of T.S. Eliot (1909-1962). Faber and Faber (I believe these poems describe mystical experience in many ways.)