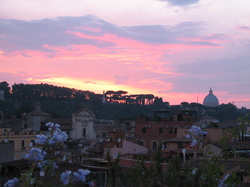 Week One
Overview of Christian Spirituality:
During the first week’s session we will discuss what spirituality actually is and particularly what Christian spirituality consists of. Included will be a reflection on our experience of God. We will look at how our image of God influences our relationship with God. Also covered will be learning about the importance of prayer, what it consists of, and some suggestions on how to do it. We will look back at some classical definitions of prayer as well as a brief discussion of mysticism. The emphasis will be on noticing the presence of God in our lives.

Week Two
Martyrs and Asceticism:
During this week’s session we will discuss the role of the early martyrs in the church and their affect upon the subsequent spirituality which developed as a result: asceticism. We will explore the cult of martyrs, as well as those who chose to give up their lives in a different way once Christianity was legalized. Included will be a description of what asceticism was then and its place in our lives today. As we study the different spiritualities during this class, they will always be applied to the here and now. There will be some prayer suggestions based on the style of the early church Mothers and Fathers.

Week Three
Celtic Christian Spirituality:
This week we will discuss the influence of the early Celtic people on the Christian tradition which developed after Ireland became Christian, as well as that of a few of the Saints who labored in the spread of Christianity. Included in this will be an exploration of the underlying sense of God’s presence all around us, the experience of God as reflected through and in creation, and the simplicity of finding God in all our daily tasks and routines. We will discuss the notion of the soul friend and the concept of spirituality as a journey both with and towards God. Celtic spirituality is rooted in a deep felt sense of the presence of God. As in all the spiritualities covered in this seminar, the hope is to apply the wisdom of this spirituality to our present day lives.

Week Four
Benedictine Spirituality:
We will enter into Benedictine Spirituality by briefly exploring the world of the first monks. We will look at the basics set down by St. Benedict, the Father of Western Monasticism, and why his Rule for Monks is still so popular today. While we will not be focusing solely on life in a monastery, we will get a feel for what prayer was like in the beginning of the monastic movement. This prayer style is still used today in monasteries, but also it is embraced by many lay people in all walks of life. This style of prayer is called Lectio Divina which will be explained in some detail. The goal of the monk was to seek God in the balanced life of work and prayer. We will look at how we can apply the wisdom of St. Benedict in our own lives, too.

Week Five
Carmelite Spirituality:
We will enter into the heart of Carmelite spirituality by entering into the lives of three important Carmelite saints: St. Teresa of Avila, St. John of the Cross, and our parish patroness, St. Therese of Lisieux. St. Teresa was the reformer of the Carmelites, and in doing so she wrote some beautiful books about prayer and living a life of prayer that are applicable to everyone. St. John of the Cross, who reformed the order of Carmelite men, was both a gifted poet and a mystic who offers more insight into prayer and relating to God. Finally, St. Therese, a faithful spiritual daughter of St. Teresa of Avila, lived her “Little Way” and touched the lives of millions when she could have died in obscurity. We will briefly explore their lives and the wisdom they offer us. (For anyone interested in the parish pilgrimage, this would be a great way to learn something about two of the saints we will “encounter” as we travel to Avila and Lisieux this summer.)

Week Six
Franciscan Spirituality:
St. Francis of Assisi is probably the most beloved saint of all time. Yet many people only know him as the patron saint of ecology or as the statue seen in gardens, holding a bird in his hand. There is so much more to St. Francis of Assisi and the spirituality which grew from his life and the community he began! This week we will delve into the lives of St. Francis and St. Clare, both of whom lived what we now refer to as Franciscan spirituality. We will explore the joy that marked each of their lives, especially the quality of joy in the midst of suffering. We will discuss the utter simplicity in which Francis lived and his complete dependence upon God. Also we will look at the type of religious lifestyle he began when he attracted followers, the mendicant way of religious life. Francis did not really write books, but we know a lot about what he taught and the beautiful way he imitated Christ to the full.

Week Seven
Ignatian Spirituality:
This week we will be exploring the spirituality associated with St. Ignatius of Loyola. The experiences of his early life and his dramatic conversion led St. Ignatius to an understanding of how the Holy Spirit moves in our lives. He composed the Spiritual Exercises based on his experiences and what God revealed to him through his reflection on his personal experiences. There will be discussion of what the Spiritual Exercises consist of and the concept of finding God in all things. Central to what we will discuss is the process called discernment of spirits. St. Ignatius teaches us how to discern what is of God in order to follow the way the Spirit is leading us in our lives. Also we will look at prayer and meditation in the Ignatian style.

Week Eight
Death and Resurrection: Christian Themes in the short stories of JRR Tolkien:
This week we will delve into the Christian themes that are present in the short stories of JRR Tolkien, especially the themes of death and resurrection. Many people are unaware that Tolkien was a devout Catholic who looked upon his faith as the defining element of his life. While Tolkien would have disliked any attempts at dissecting his stories to explore the meaning, we will in fact look at a few of his stories and the themes they contain. We will only briefly discuss the Lord of the Rings as a way to set up an understanding of Tolkien's deep Catholic faith, since there is much evidence of it in that work. His short stories are vastly different than LOTR, with no exotic creatures or epic battles. Our emphasis will be on one particular short story, Leaf By Niggle, and on some of his letters. These truly show the heart of this great Catholic man, and give evidence of just how deeply he entered into his faith. (You do not need any previous knowledge of Tolkien, nor will you have had to read any of his works to enjoy this session.)

Week Nine
Iconography: Praying with Icons:
This week we will learn about iconography and the symbolism contained in many icons. We will look at the different types of iconography, what icons say to us, and how to use them for prayer. Icons are for veneration, but they also allow us to be drawn into the images in meditation and contemplation. We will study a few icons in particular, beginning with the most famous icon by Andrei Rublev, the Old Testament Trinity. Many people do not understand what icons are about and therefore they say they do not care for them. However, once there is an understanding of what the icon is saying, it changes our perception. Icons are not portraits and they are not meant to be anatomically perfect. Rather, they are meant to help us enter into mystery, the mystery of God and the nature of holiness. The symbols will be explained so that we can have a deeper appreciation of what icons are really about.

Week Ten
Marian Spirituality:
This week we will be discussing the Blessed Virgin Mary and her role in salvation history. Mary is the Mother of Our Lord and she is the Mother of the Church. We will discuss what we know of her life, some of her titles, and especially her role as intercessor. The discussion will be based on what the Scriptures reveal about her. In addition, we will discuss some of her appearances throughout history, with the major emphasis on Fatima and Lourdes. Our parish is offering a pilgrimage this summer which will go to both of these sites. Whether you are able to go on the pilgrimage or not, this session will provide insights into the most holy woman to ever have lived, whom we venerate for her assent to God’s call. Her “yes” to the invitation of the angel changed the world. Come and join us to learn more about her.